Drawing to a Close

I hope your April has been going well!

The past few weeks have been absolutely crazy for Laurence and I with a lot of ups and downs. I know a lot of you I'm not able to talk to regularly, so I thought this would be a great way to update you on our lives. During Spring Break we found out our dog, who is a dachshund named Goliath, has a degenerative disk disease. We think because of the disease he fell down a flight of concrete stairs. We ended up taking him to 3 different vets. The first two had very discouraging prognosis'. They basically told us that most likely he wouldn't heal on his own; the only way to fix the problem was through surgery and that would be around $4000. We didn't think we could do that, and they told us that the condition was pretty painful. So we thought we were going to have to put him down. It was a really emotional decision.

Luckily, we had a bunch of dog loving friends who encouraged us to just try to get a third opinion. He originally got hurt in Lubbock, TX, so we took him to his vet in Richardson. I am so incredibly thankful we did! She had a much more positive prognosis and believed that he actually could do a full recovery if given enough time to heal and recover. So she suggested we put him on strict kennel rest for two weeks, and we could evaluate what to do after that time. He has been recovering so well and is having no problem walking on his own. He also is in no pain and seems mostly normal (he just walks a little funny).

On top of all the dog craziness, we've been in the process of trying to buy a house for the first time! That process has been crazy, frustrating, and slowly working out in such a neat way. I'm so excited to say we will be closing on our house this upcoming Tuesday!

I realize that is kind of a long update, but I just wanted to take a moment to praise God. This has been such a crazy, stressful month, and I feel like he has been incredibly faithful and present through this whole time!

I normally try to keep these blogs kind of short, but before I go, I also wanted to briefly share this neat ministry story. Last year I had been mentoring a few different students who were reaching out to this girl who had grown up Hindu. She was interested in learning about other religions and was/is going to a couple different religious groups to try to figure out what they all believed, and ultimately to figure out what she believes. They had invited her to do a one on one Bible study, and she refused. That was just a little bit too much for her, and she wasn't trying to convert.

All 3 of the students who had been reaching out to her graduated last spring, and I personally didn't keep tabs on whether this girl came back to our ministry this year. Crazy cool God deal happened, though, and she ended up getting involved in another core this year. The new corefas asked her if she wanted to do a one and one Bible study, and she again refused. Then around November, she came back and asked if that offer was still available!!!

I had time to pick up another study, so I started meeting with her. She still doesn't want to be converted and doesn't want to change her life based on what the Bible says, so we aren't quite doing a one on one Bible study yet. We just talk a lot about who God is and how do you decide/know there is a God. This is by far one of my favorite meetings a week, and it's been so encouraging getting to talk about how neat God is and how he has moved in my life. I'm so excited to see how God continues moving in this girls life.

I just wanted to ask you all to keep her (and myself) in your prayers. More than anything I really want to lead her to Jesus, and with every person that looks differently. I need wisdom and the Spirit to continue guiding me in this process and for God to continue softening her heart and revealing himself to her.

We're also in the process of wrapping up the year, and we (myself, the rest of the staff, and our students) could really use prayer requests about ending the year well.

Thank you so much for reading through the blog! I know it was a longer one, but I feel like so many neat things have been happening. Hopefully you're encouraged! 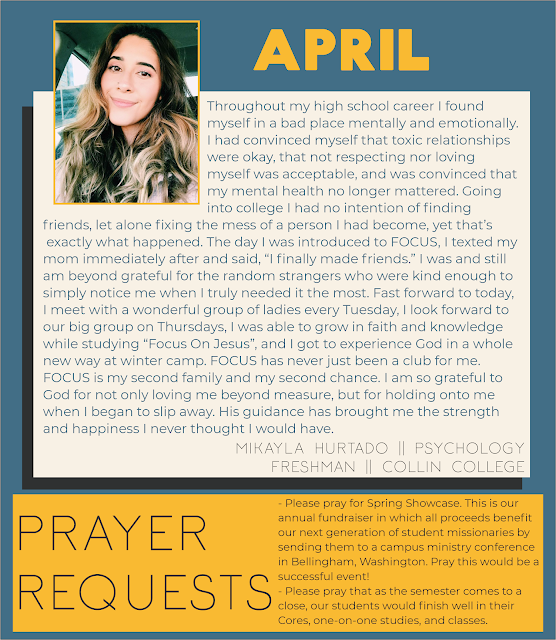