I've been praying that you're all doing well. I can't believe that it's already April, and the school year is coming to an end. It's bitter sweet. I'm obviously excited for summer and a change of pace, but I'm sad to say goodbye to the year. So many of the people I've been working with are going to go back to their home towns for the summer.

Anyway I'll jump in and tell you a few things that happened in March. 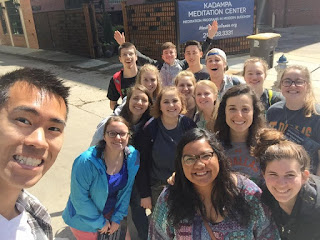 This is the amazing team that volunteered to do evangelism for a week on a campus they don't attend!  These students came from Washington state to show our campus Jesus, and it is just so incredibly encouraging to have them. I think I can get really excited about outreach at the beginning of the semesters as we're welcoming students to the campus. After that I just kind of forget that outreach is important. I will push that aside to begin building relationships that I've made. SSI helps to remind me that outreach is something that I can and should be doing more often throughout the semester and not just isolating it to the beginning.

This year we've been experimenting with our outreach some. Normally we have these display boards that will have a spiritual question on it. We'll ask people walking by whether they want to answer our question, and we hope that people will stay and keep up a conversation. This year we've tried to do some more relational things. We set up different games outside, and we invited people to hangout and join us. I've almost been shocked at how successful this has been. We had several people coming to hangout with us throughout the week; we had people start coming to core from this or start coming to FNF. I'm already excited for next year to start, so we can start outreach all over again!

I hope you were able to attend our annual Spring Showcase. It was such an incredible show! We do this every year to help raise funds for students going to the Student Institute of Campus Ministry (SICM). It was a huge success! We had about 1000 people attend, and we were able to raise $18,000 in one night. Thank you so much if you were able to donate in some way to this. 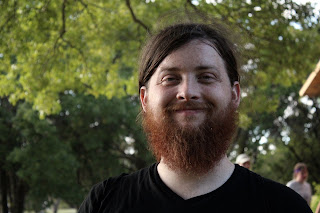 "When I first moved to Denton, I wanted to find a church group that I could connect with like the one I had back home. I prayed fairly frequently for a church at first, but after a few months I gave up. I started to feel extremely lonely and somewhat depressed without my former church family nearby. A little over a year later, I was invited to FOCUS by my roommate, Brad. At that point I wasn’t a student so I felt strange going to FOCUS. But Brad was persistent, and he invited me to his Core as well. It was in that Core that I began to feel the sense of community I had lost. I had a group of guys opening up to me and giving me the opportunity to do the same. My Corefa asked me about my plans and goals for the future and I told him, at that time, I didn't really plan for the future. He asked me about school, and I told him I wasn't interested in school. I thought it was silly and a financial waste. He brought this conversation up multiple times, and I always shut him down by telling him I had no reason to go to school, but I could tell it was important to him. I finally asked him why he cared so much about something I could care less about, and he told me he cared about my future. I finally decided to hear him out and he started talking to me about North Central Texas College. We researched NCTC

together and found it had programs I was interested in. We also knew that FOCUS was wanting to build a ministry there. I was afraid to become a student, still using finances as an excuse, but so many people were willing to walk me through the financial aid process. After making the decision to become an NCTC student, I committed to being a leader as well. God not only answered my prayer for community, but also radically changed my life as a student and a disciple."


Thanks so much for supporting me and this ministry. Our fundraising season is about to start up, and I'd like to ask you to be praying for that. It can be really scary to go out and ask people to partner financially with you. It took me a little while to get more comfortable with it, so I ask that you pray for boldness for our new apprentices as they're experiencing their first fundraising season.

This year I'm looking to increase my monthly support by $500, and I need a little help from you. Here are three ways that you can help me:

1. I really need prayers throughout this process
2. I'm trying to think of some new people to ask to join my ministry support team. I would really appreciate it if you could think and pray about whether you know of any people who would want to join.
3. You could increase your support. Even a little bit of an increase helps!

Anyone of these things is incredibly helpful, and again I really, really appreciate your heart for giving. I can't thank you enough for letting me do what I get to do and work with the people I work with!