Christmas is right around the corner, and this semester is pretty much done. Normally I try to do some pictures in my blogs, but this month I don't have any. Instead, I have two ministry situations that I'd like you all to be praying over. They're both just sitting kind of heavy on my heart, and I'd like you to join me in praying for these woman!

Within the past month or two, we've had some pretty challenging ministry situations occur. The first has pretty much kind of worked out, but I would still really appreciate some prayers. I'm studying the Bible with a girl, and for a few weeks we struggled to meet with each other because I had a big ministry situation that I was dealing with and had to go to a core during our FOJ time a few times. Then she kind of cancelled on me and before you know it, it's Thanksgiving break. After I came back from break I begin finding out from other people that she's stopped coming to things. I had her boss call me and ask me about her, old roommates, and her core facilitator. I was pretty shocked! This just did not seem like the girl to disappear on people and responsibilities. And I was sad because I had neglected her and didn't even realize that she was struggling. About a week after Thanksgiving, she started responding to people, and I was able to meet with her and talk to her about what happened. She's seeing a counselor now and working through some stuff. She's trying to get more involved in community and spend more time with God. I'm so excited that she's doing better, and I would definitely appreciate prayers for her. It's hard when things like this happen so close to a break because people don't have much of a chance to make changes. They go home, they rest, and sometimes they forget. They come back and what had seemed so real, now seems like a dream. The change that really needed to happen gets pushed off. I don't want that for her! So please pray for her and for her break.

This capriciousness is normal for college students which is the crazy thing! You can be working with someone and feel really good about them, and the next day or maybe even a few hours later, they can be in crisis. So much can happen in such a short time! It's hard not to want to feel the weight of that sometimes. It's times like these where I just have to remember that God is the one in control; I can try to lead people to Him, but only He is capable of really changing people.

The second situation is what I was dealing with that made it hard to meet with the previous girl, and this one is still kind of working itself out. We've had people that don't go to college, who never plan on going to college, come to cores before. It's normally not a big deal. This year we had two non-students going to one of our woman's cores, and we saw that it was becoming a big deal. These two girls were just kind of hijacking the core. One girl specifically would be playing on her phone during the scripture discussion, then make any of the conversations about herself. It was really hard for the corefas to cut her off for a number of reasons, but they would try their best. That core had mostly freshman girls, and they were all inconsistent. The corefas went and talked to the girls, asking about their experience in core, and several of them brought up how easily the core would get sidetracked. Gosh I did not know what to do, and these corefas were also new! I should also mention that for sake of time, privacy, and length I'm leaving out a lot of details, so the situation may not seem as complicated or difficult as it really was. Anyway, Mandy and I brought the situation to our staff, and we decided that we needed to ask these woman to leave our ministry. We are a campus ministry, and what they both needed was a more long-term ministry, where they could meet people who could pour into them and had resources that we just don't have. So I went and had those conversations, and I promise you there is no good way to say we want you to leave our ministry and transition to church ministry. Those two woman were so hurt and angry. I had a 45 minute phone conversation (after I had talked to this girl in person) where she just ranted again me, saying we had no grounds to do this, we were being controlling, ministry should be open to everyone, etc. The crazy thing is that we don't always think that. We wouldn't say it's appropriate for a teenager to keep going to children's ministry. Or for someone in college to keep going to their youth group. At some point, we have to move forward. But she was not on the phone with me to discuss anything; she just wanted to be heard.  Anyway now their trying to go over our heads, and I think get Mandy and myself in trouble. It's just kind of a mess of a situation.

Gosh I don't even know really what to say about this situation. Honestly it just makes me sad more than anything else. Asking them to leave was a hard decision to make, and it lead to probably some of the hardest conversations I've had to have. I just look at how both woman reacted, and I look at the lives their both living and can't help but feel sad for both of them. I should also say that both woman are Christian and have a church home. We were not leaving these woman high and dry, and I offered to go visit other adult small groups with them if they didn't like what their church had to offer. But they both took being asked to transition so hard and very personal. I really do want what is best for these woman, and I want them to know Jesus. I guess that is my prayer request for this situation. It's such a sticky situation, and I pray that God would do what is best, both for the woman in that core and for these two woman.

Thanks for all your prayers! And for reading all of that. I hope you have a Merry Christmas and enjoy being with your families. 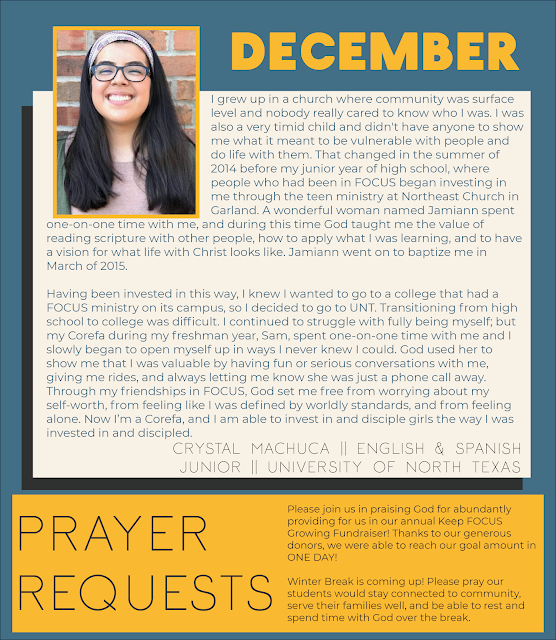