I hope you're doing well! I can't believe it's almost Thanksgiving. This semester has felt a bit of a whirlwind. A small update on myself, Laurence and I finally moved into our house a few weeks ago. We had spent a lot of time working on it and trying to get it move in ready. That made the first part of this semester really exhausting, but now that we're moved in, our lives have normalized. We're feeling less exhausted and ready to finish out this semester strong!

Sadly this blog doesn't have any photos. The camera on my phone broke, but I should have photos in the next one! But I do have two good news stories I'd like to share with you.


The first one is a little longer and for this girls privacy I'm going to change her name to Katie. Anyway, Katie came to UTD thinking that she was a Christian. She had kind of grown up one, but was living a party life style. When she came to UTD, she continued in the party scene and started rushing for a sorority. A cool part of this story is she actually got plugged in with another ministry on campus called Campus Outreach (CO). In that ministry she learned that she actually hadn't been living as a Christian and decided that she wanted to start living for God. Around this same time, one of our corefas, who was in the same sorority, invited Katie to their core. She came! And that weekend she came to Fall Camp! It was after this that I met Katie. She had agreed to do a one-on-one Bible study. We met up the last week of September, and two things became super clear.

1. I don't think this girl realizes how difficult changing her life is going to turn out to be
2. She needs community!

Let me elaborate. I'm sure all of you have tried to change some big habits, maybe for some of you it was just your diet or something like that. Regardless of what it is, it requires huge changes. You have to stop buying old foods, start buying better ones. I remember in college I actually had to change grocery stores because it was just too hard to not impulsively buy junk food at the one I was currently going to. Anyway, Katie had said she wanted to follow Jesus, but thought that God would just take away all her desires for alcohol or some of the other bad activities she used to do. She thought she could still go to all the parties and wouldn't have those struggles.

As you may have guessed, that didn't work. I mean it did for a few weeks, but after a while she started drinking with all her friends. Which leads me to my second realization. While Katie was participating in a lot of Christian activities, she wasn't really building a Christian community. Really she didn't feel like she had any friends at all. She was sad, and the first time I met her she was talking about how she just wanted friends who really cared about her. She was going to all these things, but didn't feel like she was really finding friends to hang out with at any of them. Now I do want to say I think her corefas did a great job trying to invite her in. But corefas only have so much time! Leading core is basically a part time job, and they're in school full time, plus some of them have jobs as well. So the corefas were inviting her in, but couldn't really be her only people. And the core this girl in doesn't really have other people who are already plugged into FOCUS and could help connect this girl to our larger ministry. Their core was filled with newer people who were trying to figure out what it means to really live for God.

Anyway, when Katie realized that God wasn't going to magically take away all her feelings, she started backsliding. She believed "Well I'm always going to be a sinner. I just take the super slow path to trying to change. And God must be ok with that because he knows I'm a sinner." She started getting more plugged in with her sorority, and her and her boyfriend started spending the night together. This was actually a super scary time. She was such a new Christian, and I thought she was about to reject God because things were just too hard. And I realized her problem. Again, if you've ever tried to make a huge change, you know that you can't just stop doing things. You have to replace old habits with new ones. She had tried to change, but she was still continuing to do all these old habits. And when she didn't go to those parties or hangout with those friends, she would just feel sad and alone in her room. She hadn't found new friends or new activities to replace those old ones.

Since then I've been trying to get her plugged in with more people in our community. And the good news is I think it's working! She's been coming to more things, and I'm really hoping that this helps her make some good Christian friends. The other day she told me that she isn't sure she wants to do her sorority next semester because she isn't having fun. Please, please keep this girl in your prayers. I can see God moving in her life, and I just pray that she chooses him and chooses to leave her past self behind!

This story is a lot shorter. Darby Cleveland, another staff person, had been doing a one-on-one Bible study with Allison over the summer. Darby moved to Denton, though, so she couldn't finish. It took a bit of time to get the study picked back up again. Our corefas didn't have time, so I started meeting with her. This girl has a similar story to Katie, where she also has a party background, but she wants to change it; and she's been making active steps to try to change that! I started meeting up with her, and we just went over a lesson on baptism. She wants to get baptized!!!! We're currently working on when this is going to happen, but I'm really excited. She specifically wants to make a commitment to live for God and wants other people to know she's made that commitment. God has just been doing some neat things in our community this year, and I'm really excited about it.

Thank you so much for all your prayers and for being passionate about campus ministry! I really have seen this impact so many lives, including my own, and FOCUS couldn't exist without such generous people supporting in and helping it to continue.

On that note, I wanted to share about a new opportunity coming up. Every year we have a big fundraiser called, Keep FOCUS Growing or KFG. While each of our staff raise support, it takes more than that to keep us doing ministry! We need outreach activities/materials, administrative support, health/retirement benefits, and have visions for planting on new campuses in the DFW area. This fundraiser is about being around for the long haul and meeting needs that aren't just staff salaries.

This year some of our generous donors have banded together and agreed to match up to $36,00 in total donations during this campaign. So if we receive $36,000 in total contributions, they will kick in a SECOND $36,000! Your first chance to give will be on December 3rd! We're mainly going to be pushing this through Facebook because they don't charge any credit card fees. So if you have Facebook, be looking out for that. If you don't have Facebook, no worries! You can also give via check or through our website at anyfocus.org/KFG.

I know you guys have already been so generous, but I encourage you to think about whether you'd like to give to this at all. 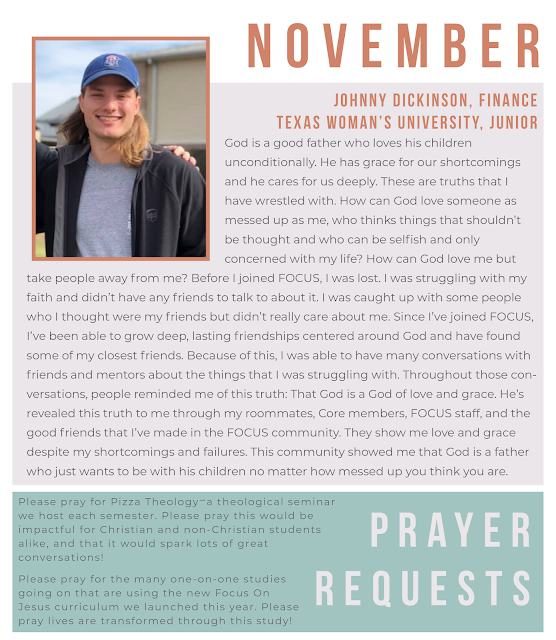 Posted by Sarah Hubbard at 11:15 AM No comments: